The King James Bible Translators and “The Overthrow of Stage-Playes” 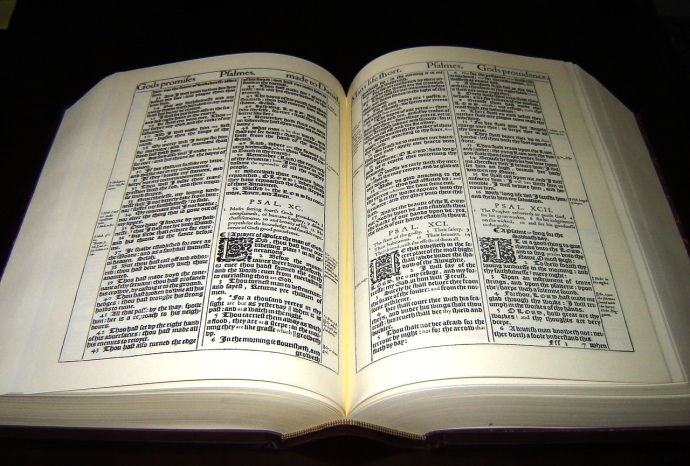 Looking back four centuries, no one would ever imagine that the authors of the two greatest literary achievements of the English Renaissance – the King James Bible and the collective works of William Shakespeare – nearly came to blows over their respective visions for the English language.

In 1604, 54 of England’s top scholars, divines, and clergymen were chosen by King James I (Queen Elizabeth’s successor) and Robert Bancroft (then Bishop of London) for the six companies of translators that would work diligently on their sovereign’s “New Translation” of Holy Scripture.  The product would serve as the official revision to the Bishops’ Bible – a version which had been “authorized” for use in English churches by Queen Elizabeth I in 1568, but which no one really liked.

Forty-nine translators representing traditional church officials and the stricter “Godly” party (later called “Puritans”) would live long enough to see the project through to its completion in 1611.  Several translators would be so dedicated to their work that they would ask to be carried into committee meetings on their death beds.  The end result is that these saintly scholars produced one of the most extraordinary masterpieces ever written in the English language.

But weren’t the works of the Bard of Avon also in this category?

Well, these rather stuffy Bible scholars didn’t think so.

While we can’t ascertain what every King James Bible translator thought about contemporary literary giants like Shakespeare and Marlowe, most scholars today believe that it was uniformly negative.  Moreover, we can conclude from the evidence that these single-minded creators of the KJB – authors of arguably the greatest collaborative literary work in English ever published – were. . . . err . . . fuddy-duddies when it came to the popular culture of their day.  They simply did not believe that it was worth the time of any Christian of substance to read fiction, attend stage productions, or to indulge in English poetry.

Let me put it this way:  Imagine three of the top minds among the Bible translators (one each from Oxford, Cambridge, and Westminster) playing Jacobean Jeopardy, and the Final Jeopardy Category before the commercial break turns out to be “Shakespearian Protagonists.”  Each one of these learned contestants would be utterly stumped when Sir Alex Trebek revealed the answer as, “This emotionally depressed character, who bears the same name as the title of the play, poses the proposition, ‘To be or not to be. . . that is the question.’”

Hint, guys:  The correct response isn’t “Who is the Apostle Paul?“

To conclude from their seeming lack of interest in the English Stage that these Bible scholars were geeky academics and not worldly men would be unfairly off the mark.  Their universe was that of international scholarship and wide-ranging religious and political debate.  They spoke, argued, and corresponded with English academics and colleagues throughout Europe in the Latin of Cicero.  A number of them were fluent in the more modern languages of German, Italian, and Spanish, as well.  Moreover, as true Humanist scholars – the latest trend in academic learning, which was responsible for the earlier birth of the Renaissance – they also possessed a detailed comprehension of the original languages of the Bible, such as Hebrew, Aramaic, and Greek.

In short, these guys were world-class polymaths (translation:  they knew a lot of different stuff).  The problem was that they just weren’t comfortable reading lascivious novels and sonnets or going to seedy London theaters.  Moreover, several of the KJB translators considered stage plays to pose a direct moral threat to society.

While public libraries during the English Renaissance, which tended to be located at universities, possessed few but a growing numbers of books, each translator had his own private library of printed material, plus a number of ancient handwritten manuscripts.

David Norton, in The King James Bible:  A Short History from Tyndale to Today, cites that, while college libraries typically possessed 250 and 500 books at the turn of the 16th and 17th Centuries, some translators possessed many times that amount in their personal collections.  George Abbot bequeathed over 2,000 books to Lambeth Palace at his death; and Robert Bancroft, the King’s “project manager” for the new Bible translation possessed three times as many books in his clerical library.

Norton provides a list of translator William Branthwaite’s library.  Of this respected Greek scholar’s numerous holdings – which run the gamut from the major religious treatises of the day to an exhaustive list of ancient Greek writers and the works of the early church fathers – only one category is conspicuously absent:  English literature.

Modern researchers were excited when they first thought that they had discovered among Branthwaite’s collection a copy of Chaucer’s Canterbury Tales (BTW:  Geoff’s stories are all fictional).  But this book turned out to be a religious tract written in Middle English by one of Chaucer’s contemporaries.  There was just a smidgen of poetry in Branthwaite’s library, but it was mainly of a religious nature.

But what about the wonderful plays and sonnets of the likes of Marlowe, Spencer, and Shakespeare?  Weren’t any of their great works in these scholars’ libraries?   As the Bard of Avon might have eloquently put it himself:  Fuhgeddaboudit!

Perhaps the most famous of the King James Bible translators who was actually quite repulsed by the emerging English theater of Shakespeare’s day was Oxford don John Rainolds – the very man credited with putting the idea of a new Bible translation into the monarch’s head at the Hampton Court Conference in January 1604.

Although Rainolds was the titular leader of the Puritan party, which opposed both the episcopal polity of the Church of England and the Bishops’ Bible as a sloppy translation (the latter view shared by King James himself), there is no reason to suspect that high church officials and the other men of letters on the translating committees differed substantially from Rainolds’ “unappreciative attitude” with respect to the English stage.  Rainolds was one of the King James Translators who virtually “died with his boots on” rather than abandon his post.  His integrity was such that he was a highly respected academic leader, and he served as an example for all who worked on the New Translation.

In a 1599 treatise opposing dramas and comedies and all that other rubbish brazenly being presented in the London theaters or peddled at the book stalls around St. Paul’s Cathedral, Rainolds complained that playwrights “. . . meditate how they may inflame a tender youth with love, entice him to dalliance, to whoredom, to incest, inure their minds and bodies to uncomely, dissolute, railing, boasting, knavish, foolish, brainsick, drunken conceits, words and gestures.”

So one can reasonably surmise from this that, had Rainolds reviewed A Midsummer Night’s Dream for his local Oxford PBS station for instance, he most likely would have given it a “two thumbs down!”

One of his chief objections seemed to be that male actors always played women’s roles (as this was about 50 or 60 years before women could legally appear as “players” on the English stage).  Rainolds even cited the Book of Deuteronomy to buttress his argument:  “The woman shall not wear that which pertaineth unto a man, neither shall a man put on a woman’s garment: for all that do so are abomination unto the LORD thy God.”

The Bible scholar never seemed to be impressed by the fact that Shakespeare often cited scripture in his works — usually based upon Rainolds’ beloved Geneva Bible — or that the subtext of his dramaturgy tended to feature Christian moral themes.

The strong views held by Rainolds and his like-minded colleagues as to what should be done with the English stage in general, and to Mr. Shakespeare in particular, can be aptly summed in the title of his 1599 diatribe.

Rainolds called his polemic, The Overthrow of Stage-Playes:  Wherein [it] is manifestly proved that it is not only unlawful to be an actor, but a beholder of those vanities.

Thank goodness that this dedicated Oxford professor and the other King James Bible translators never had to contend with Renaissance ROKUs.